Just when you think things cannot get more bizarre! From My Good Friends at Herescope comes another well researched article excerpt of the first section from: 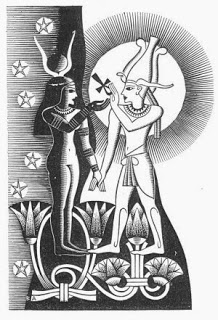 The Rise of End-Time Occultism, Part 7

A New Old Syncretism
Who would have ever thought that the evangelical world would come to this? Dabbling in the occult and being entertained by images and idols? The very sins that the ancient Hebrews were severely charged by God to avoid, are now rushing into the church at breakneck speed. As in the days of the Old Testament, the creeping gradualism of accommodating small concessions to idolatrous practices (New Age meditation, Yoga, e.g.) and has grown and expanded to now welcome the wholesale introduction of an ancient pantheon of gods and goddesses from every heathen culture.

These old idols, to which the ancient Roman world had dedicated so many temples,[3] are now being  revivified by their reintroduction in our modern era. This has come into the culture via New Age astrology and science fiction. These spectacular stories have been widely promulgated through comic books and entertainment media for many decades. But now they are coming into the church in the guise of an elaborately constructed end-time eschatology. This eschatology claims to be superior to the old models because it is based on gleanings from so-called sacred knowledge found in pagan myths and ancient writings.

Across our culture, and now in the church, mythology is being dished up on a new platter of high-tech imagery. The old lifeless wooden and stone statues (images/idols) are being re-cast into a new mold. Can these “gods” talk? The surprising answer is “yes” – thanks to Hollywood acting, film photography and digitalized imagery. It makes these images/idols more “potent,” especially in the imagination. This quality doesn’t make them “real.” Yet some prophecy teachers are claiming they are real. And it is this very claim, that they are real, that classifies them as pagan deities.

As you read the following account of how evangelicals are now adopting ancient pagan mythology and attempting to incorporate it into biblical eschatology, consider the following sober Scriptural warning about staying away from these mythological gods and their images:

“Take heed to thyself that thou be not snared by following them,

after that they be destroyed from before thee;
and that thou enquire not after their gods, saying,
‘How did these nations serve their gods? even so will I do likewise.’
Thou shalt not do so unto the LORD thy God:
for every abomination to the LORD, which He hateth,
have they done unto their gods;
for even their sons and their daughters they have burnt in the fire to their gods.”
(Deut. 12:30-31)

For the rest of the article click here: The Rise of End-Time Occultism, Part 7